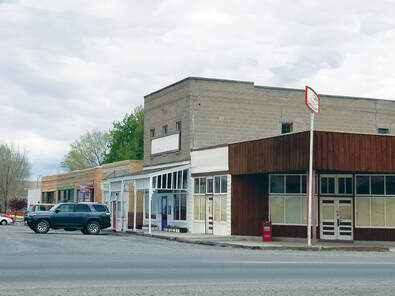 ...each community had it’s own post office and zip code, however the Cory post office, which was housed in the Cory General Store, has been closed.  Austin is located just north of Hwy 92 at Austin Road and Cory is along Hwy 65 North and West of Austin.  You’ll find the community of Eckert further North along Hwy 65 near the intersection of North Road.

In the 1900’s the area from Austin, north, all the way to Cedaredge, was covered with orchards of peaches, apricots, cherries, and apples.  Since the railroad passed through Austin, it naturally became the primary community.  The railroad carried both passengers and freight at that time and many businesses developed because of the train.  Austin had fruit sheds, a canning factory, general merchandise stores, a bank, a drugstore, a pool hall, and even a cement block factory. It even had an icehouse that was stocked with ice cut from the Gunnison River during the winter, packed in sawdust to slow the melting process and stored in an insulated shed.

Because of the railroad, Austin was a thriving community while Eckert started out as just a subdivision with a school, but no commercial businesses and Cory had a general store, but not much else.  Each community had a post office to support the local residents.  Since none of the communities was incorporated there was little, or basically no public utilities and the lack of potable water became an issue that would eventually unite the communities.

In the early 1900’s typhoid and diphtheria were rampant throughout the communities.  Both diseases are spread by drinking unclean water and at that point most households were consuming water from irrigation ditches.  There was no such thing as treated water.  Entire families were becoming ill, and the diseases were affecting their livelihoods.

The diseases spread to the Town of Cedaredge, to the north.  After determining that the water was the issue, Cedaredge and Austin got together and agreed to build the first domestic water pipeline.  There was still no “treated” water, but they decided that bringing naturally, cleaner water down from Grand Mesa would be better than the ditch water from the orchards.  The agreement was that Cedaredge would build the pipeline from the Mesa to the south end of Town and Austin would lay the rest of the pipeline. The problem was finding the money to build the pipeline.

Since Austin was not incorporated, they could not acquire a bond to pay for their share and worse yet, they didn’t have enough property value to float a bond large enough to cover the work.  While the people of Austin were trying to solve their problem, the neighboring ranchers and farmers were just as desperate to get clean water and decided to see if they could build the pipeline themselves.

In the February 23, 1912 issue of the Austin Journal the ranchers published a legal notice advising an election would be held to incorporate a new town. Because it contained so many orchards, they came up with the idea of calling it Orchard City. With voter approval, May 11, 1912 Orchard City became a town.  The new town planned to issue a bond to pay it’s $40,000 share of the pipeline but soon discovered that it did not have enough property value to acquire the bond either.

To obtain cleaner water, Austin residents reluctantly agreed to the annexation and together, under the name of Orchard City, they were able to obtain a bond of $50,000 to complete the pipeline.  By 1916 Orchard City had clean (or cleaner) water.  Orchard City town boundaries grew as nearby residents of both Cory and Eckert wanted clean water too.  While the local government was forward-thinking enough to require that owners annex into town in order to receive a water tap, the legal process was not completed.  In the 1980’s it was discovered that Eckert and Cory had never been properly annexed, and the Town of Orchard City spent thousands of dollars to publish legal notices and complete the annexations.  By the mid 1980’s the three communities officially became Orchard City.

While each community has their own history, their rural heritage and community needs brought them together.  You still won’t find tall buildings and traffic in this rural community but more and more folks are discovering this area as a place to raise a family, pursue their agricultural dreams or just retire and enjoy the bounty of Western Colorado.